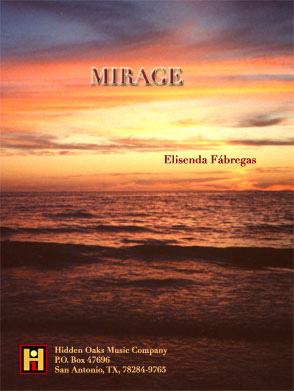 The subtitle of Mirage comes from a fragment of one of my poems, setting the mood for the shimmering beginning of the piece:
“…I felt myself floating in a vast and magic space among tingling and shining stars…”.

Mirage may evoke images to the listener but in its conception is abstract in nature evoking various emotional states with shifting states of tension and relaxation, mood and tempo.

According to the San Antonio Express News:
“Mirage is a virtuosic work that makes equal demands on a pianist’s technique, lyricism and sense of form.”

It is a ‘colourful’ piece, requiring from the performer a wide variety of touch, as well as a fluid and sparkling technique; it also demands a sense of drama and a concept of line to bring forth the driving and forward looking nature of the piece. Mirage starts with a tension building theme which is released in the slow, lyrical and peaceful second section; the third section strives again to build tension culminating in the climactic point of the piece leading back to the modified recapitulation. The piece ends with a peaceful coda.