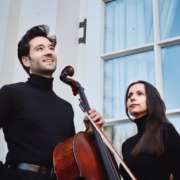 Uphill: from Clara to Robert for cello & piano (2021) was written for and dedicated to the Duo of cellist Roger Morelló Ros and pianist Anna Khomichkho. Uphill was inspired by a 16th century poem of Pedro Padilla, and also inspired by Clara’s feelings over her caring of Robert and the interruption of her composing activities.

My inspiration to write this one movement work came from two sources. I was inspired by a poem by Pedro Padilla (16th century Spain) entitled “Sierra áspera…” used by R. Schumann.  I tied this poem with Clara and Robert Schumann’s relationship. I took the side of Clara as the wife/caregiver of Robert Schumann and imagined her struggles and feelings.  Besides her duties as a wife and emotional support to Robert Schumann’s, Clara was also the mother of eight children, pursued her own career as a pianist/composer and left us 66 compositions.  She was regarded as one of the most distinguished pianists of the Romantic era, with over 61-years of concert career, changing the format and repertoire of the piano recital from displays of virtuosity to programs of serious works.

We know from her quotes that she felt insecure as a composer in a time when women were seen only as mothers and not fit to pursue creative endeavors such as writing music. There were no women composer models to be followed. A famous quote from Clara corroborates such feelings:

“I once believed that I possessed creative talent, but I have given up this idea; a woman must not desire to composer – there has never yet been one able to do it. Should I expect to be the one?”

Clara Schumann was a super woman doing it all, like many others during her time. This music is my way of honoring Clara Schumann.