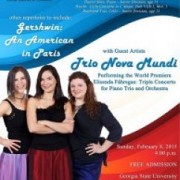 This concerto is a reflection on the state of coexistence among diverse populations of the world and an homage to the unique medieval culture of Al-Andalous in Spain, a culture in which three diverse populations – Arabs, Jews and Christians – coexisted harmoniously for almost eight centuries. Metaphorically, these three populations are represented by three soloists – sharing equally the limelight, interacting with each other, and dialoguing with the orchestra. There are three movements, each with a tripartite structure.

The first movement (Allegro moderato) features haunting harmonies and pleading melodic gestures evocative of flamenco, as well as an exciting cadenza-like passage for the three soloists in the center. The second movement starts and ends with a Pensaroso (Pensive) section that flanks an intense Appassionato and a triumphal section marked Con resoluzione. The third movement (Allegro deciso) is distinguished for its energy and rhythmic vitality, with an expressive and quasi-religious passage in the center played by the violin and the cello.