Duration: 20′
This is an arrangement of the piece of the same title (Goyescas) for flute & guitar. The flute & guitar version was written for flutist Marina Piccinini and guitarist Emanuele Segre
It was premiered on January 23, 2009 at the Philadelphia Chamber Music Society.
The flute, viola and piano arrangement was made for Ensemble Gaudi in Barcelona, Spain. It was premiered on June 28, 2009 at the International Music Festival of Sitges (Concerts de Mitjanit)

“The seven short pieces by Spanish pianist and composer Elisenda Fäbregas were originally duets for flute and guitar (2008). Under the title of Goyescas, this work was inspired by five paintings of Francisco Goya. Now that is arranged for flute, viola and piano (2009), this music shows their different characters in an impressive way, be it folkloric elements, spirited rhythms or the Spanish zest for life. Traditional echoes of some Spanish music are mixed with contemporary compositional techniques. Like a fanfare, Pregon’s movement opens the cycle. Afterwards is a description of the royal family of Carlos IV, two ‘majas’ and a mysterious, sleeping woman in El sueño (The dream). It follows the musical interpretation of a dark painting of three working men (La fragua), before a variation of the opening piece follows and the cycle finally ends happily with the beginning of the children’s game La gallina ciega (The blind man’s bluff) its sunny end. The seven pieces do not have to be listed as a 20-minute cycle, but can performed on its own since they are very personal in their own composition. Virtuosity and rhythmic stability, assured intonation as well as high musicality are demanded by all three interpreters and make the poetic tonal language an extremely intense sound experience.” 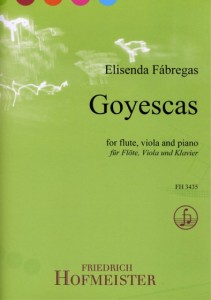 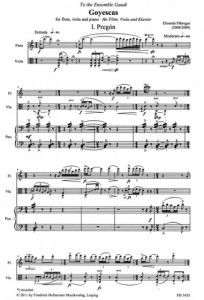 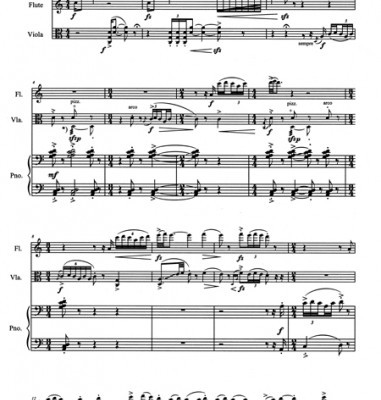 Voices of the Rainforest, for flute, cello and piano (2008)