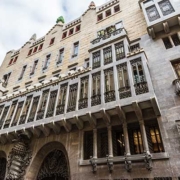 Danses de la terra (2020) (Catalan dances) for solo cello was written for Catalan cellist Roger Morello Ros. He will premiere this work at Palau Güell in Barcelona on October 28, 2021.

Danses de la terra was written for Morello and consists of four dances:

Although not literally based on traditional Catalan music, this work is inspired by the composer’s childhood memories of Catalonian dances and folk music. As a Catalan living outside Catalonia since 1978, the author recreates a Catalan sound world of melodic and rhythmic folk idioms tinged with emotions from her childhood. This concert will also include other solo cello works by Catalan composers such as Albert Sardà, Josep Maria Guix, and Gaspar Cassadó.