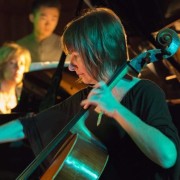 Voices of the rainforest for flute, cello and piano.

Voices of the rainforest was performed by the Land’s End Chamber Ensemble at the concertOn Biophony along with works by George Crumb and others.
Published by Hofmeister MusikVerlag.Available for sale.

The premiere recording of Voices of the Rainforest performed by the Meininger-Trio is released on Haensler Records and available atAmazon.com 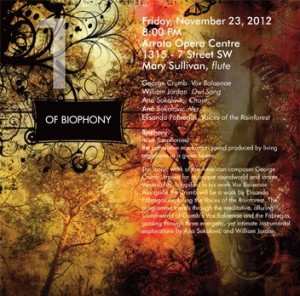 Colores Andaluces for cello and piano has been recorded by Milos Mlejnik, Violoncello and piano, Rainer Gepp, piano, of the Meininger-Trio on the album Dert Seelenvogel – Soulbird!. This album also includes music by Astrid Spitznagel, Cecilia McDowall, and Stefans Grove.

Colores Andaluces for cello and piano is published by Hofmeister MusikVerlag.

Mirage (1997) and Homenatge a Mompou (2006) are published by
and available at Hidden Oaks Music Company
A live recording of Mirage performed by Roger Wright
is available on ABC Classics at Amazon.com 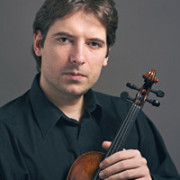 Hungarian concert violinist Rodrigo Puskás superb artistry and distintive style of playing, characterized by a ‘beautifully moving and warm’ singing tone, along with breathtaking virtuosity, inspired the composer to write two works for him.

Ancient walls (2012) is a one-movement work for the violin that echoes the sounds of the ancient world. The title is a metaphor for the ‘walls’ that, literally and figuratively, sometimes separate cultures and people from each other; and also alludes to the common European heritage shared by Puskás and the composer, both natives of fiercely independent cultures that have struggled over time to retain their identity.
Ancient Walls is published by Friedrich Hofmeister Musikverlag.

Wandering spirit for violin and piano (2013) is a musical metaphor for the quest for truth, which is symbolized musically by moments of discovery, with longing and soaring solo lines in the violin, and moments of struggle marked by dissonant interaction between the violin and the piano. This work ends with a bright major harmony through which both the music resolves and the quest comes to an end.
Wandering spirit is published by Hidden Oaks Music Company. 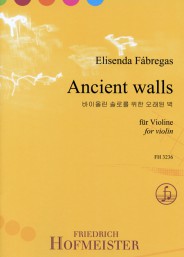 The premiere recording ofVoices of the Rainforest performed by the Meininger-Trio is available on Haensler Records. This recording features also music by Libby Larsen,Chen Yi and Kate Waring. Here is a sneak preview of its cover and contents! 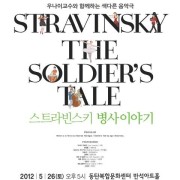 This composition was inspired by two poem in the Catalan language: Retorn a Catalunya by Josep Carner and La Sardana by Joan Maragall. Carner’s poem describes both the excitement and nostalgia he feels on returning to his country after a long absence. Maragalls’s poem is an homage to the sardana, the National dance of Catalunya. This work has three movements – the first and the second are connected. Carner’s poem is read at various points throughout the first and second movements. Only one paragraph from Maragall’s poem is read at the beginning of the third movement.

I. La serra de foc (The mountain of fire) is inspired by the poem’s sense of expectation and excitement at the return to Catalunya, and also by the proverbial Catalan strength. As the poem says: “la forca tota vella … que ens agermana” (the old force … that makes us family).

III. Dansa (Dance) is an homage to the sardana and uses its basic rhythm, as well as typical melodic turns of the dance.
Retorn a la terra uses the same instrumentation as L’Histoire du soldat by Stravinsky and both works will be performed at the same concert. 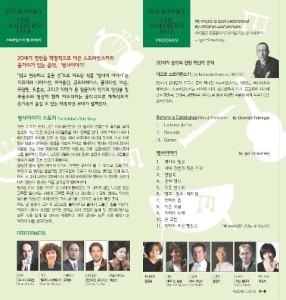 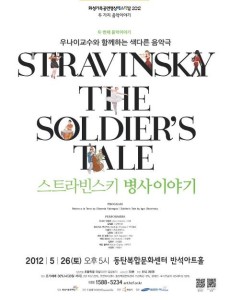 is a compact one movement dramatic work for symphony orchestra (approx. 10′) that deals symbolically with the creative and destructive powers of nature.

Terra Mater follows the footsteps of Voices of the Rainforest (2007), another work dealing with nature. However the content and gestures of Terra Mater have a deeper sense of urgency. I have always felt that the earth is an organism just like we are, and as such it deserves our respect. If we fail to take care of the earth it may lead to our own destruction. Beneath the dramatic gestures of Terra Mater there is an underlying and compelling lament that surfaces at crucial points of the piece connecting the various strains and providing structure. I have wanted to write an orchestral work on this topic for long time and I welcome this opportunity with excitement. The recent weather events in all parts of the world make nature a ‘hot’ topic and I am eager to make a contribution in musical terms. I live now in Seoul and last summer I had the chance to experience the Asian monsoon season; it was apparently one of the hottest and rainiest summers on record in Seoul. This extreme Korean weather reminded me of the Texas summer storms at most violent. To me there is nothing more awesome and overwhelming than the power of nature. I can understand how ealier civilizations, much more connected with nature than we are, worshipped many elements of the physical world with its capacity to create and destroy.

Voices of the rainforest for flute (alto flute), cello and piano (2007) was written for the Meininger-Trio.
The premiere of Voices of the rainforest took place at WDR Concert Hall in Cologne, Germany, on March 15, 2008. This concert was broadcasted on April 26, 2008, on WDR’s program Nachtmusik. The pre-premiere took place at the Ibero American Institute in Berlin on March 14, 2008. This concert was sponsored by the Spanish Embassy in Berlin and the Oro Verde (Tropical Rainforest Foundation)

Voices of the rainforest is a loose representation of a day in the life of the rainforest. This work came about as a result of my life-long fascination and love for nature. A recording of actual sounds of insects, barking frogs, birds, and the singing of natives of the Papua New Guinea rainforest was the final inspiration for this work. It consists of five movements:

The slow movement (Voices of the night) uses both the alto flute and the regular flute. However there is a version for regular flute only.