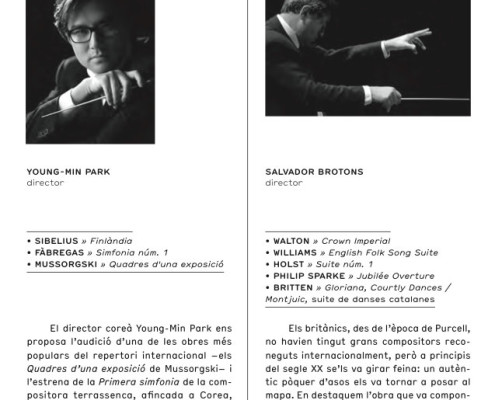 Symphony No. 1 for Symphonic Band was commissioned by the Banda Municipal de Barcelona and is dedicated to its principal conductor Salvador Brotons, The premiere took place at L’Auditori*, Sala 1, Pau Casals, in Barcelona on February 9, 2014, at 18:00 PM. This concert included works by Sibelius (Finland) and Mussorgski (Pictures of an Exhibition) and was conducted by Maestro Youngmin Park.

This Symphony consists of four movements: movement I and IV are traditionally symphonic – dramatic, with extensive thematic and rhythmic development, textural contrasts and grand sonorities. The second movement, Canço, is intimate and has the melodic and expressive characteristics of a Catalonian song. The third movement, Scherzo, has an evocative melody in the central section framed with sections featuring playful ostinatos. The last movement, Tempo giusto is majestic and has the character of an epilogue, balancing the symphonic weight of the first movement and bringing back some of its thematic and rhythmic material. There is no program associated with this Symphony and is abstract in nature.
Program notes in Spanish 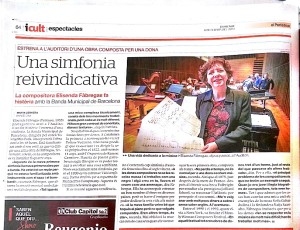 Interview on the National Catalan newspaper El Periodico on February 9, 2014

Colores Andaluces for Cello and Piano

Solitary for baritone, clarinet, cello and piano (2009)
Scroll to top