March 5, 2006 – The Bloedel Reserve, Bainbridge Island, Washington -performance ofSonata No. 1 for violin and piano (1994)by the Kobayashi/Gray Duo .

May 13, 2006 – 2006 International Alliance for Women in Music Congress in Miami, Florida – performance of Moments of Change (2004) based on poetry by Margaret Atwood by soprano Eileen Strempel and pianist Sylvie Beaudette.

July 4, 2006 – 2006 National Association for Teachers of Singing (NATS) National Conference in Minneapolis, MN – performance of Moments of Change (2004) based on poetry by Margaret Atwood by soprano Eileen Strempel and the composer at the piano. Performance will be part of the Lyrica Society program.

Friday, September 15, 2006 at 2:30 p.m. – San Antonio Ballroom (Crowne Plaza), performance of one movement of Sonata #1 for Violin & piano (1994) as part of the Lecture/Recital titled “A Century of New and Renewed Music by Women Composers” presented by the Kobayashi/Gray Duo.

October 13, 2006 – Celloherbst, Germany, premiere of Colores Andaluces (2006) for cello and piano by cellist Franoise Groben, member of the Meininger-Trio.

November 18, 2006, at 7:30 PM – Performance of Sonata for flute & piano (1996) by Tallon Sterling Perkes and Kristin Roach at Ruth Taylor Concert Hall at Trinity University. Concert organized by the Composers Alliance of San Antonio. 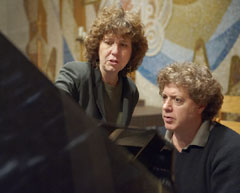 HOMMAGE A MOZART, a solo piano piece written for concert pianist Eric Himyin honor of the 250th Anniversary of Mozart’s birth in 2006, will be performed by Eric Himy at the concert halls below. A few of these concerts are sponsored by American Composers Forum through its Encore Program, supporting repeat performances of new works. Eric recordedHommage Mozart for the Centaur label in June of 2006. See CD Review. He is featured in the May/June 2006 issue ofClavier.